Eric Gagne was coming in to shut down games for the Dodgers starting in 2002 after being converted to from a starter. For three straight years, he absolutely dominated opposing hitters, breaking save records in the process. From 2002-2005, fans knew that when Welcome to the Jungle blared across the speakers at Chavez Ravine, the game was basically already over.

Gagne made an appearance on the Dodgers zoom call on Monday, and one Reddit user noticed something during the call. Gagne held up a bat that included years the franchise had won the championship, and 2017 was the last year. 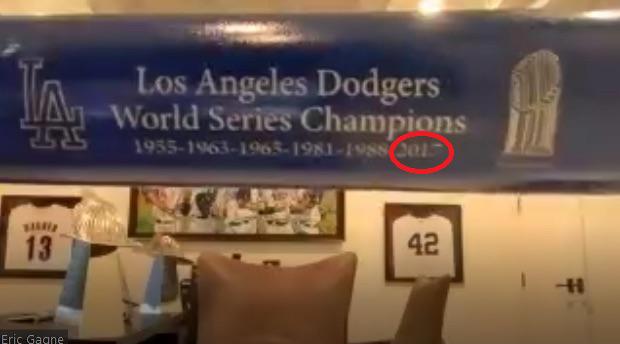 This is, of course, a jab at the Houston Astros, who notoriously cheated their way to a World Series victory over the Dodgers in 2017. Gagne may have gone on to play for a few different teams around the league following his time with the Dodgers, but it seems he will always bleed blue.

Gagne, who is now 44-years-old, attempted a comeback to baseball as recently as 2017. He worked out with the Dodgers during Spring Training that year and pitched in the World Baseball Classic. He signed with the Long Island Ducks of the Atlantic League but retired just a few short weeks later. He pitched in just five games and allowed five earned runs.

Dodgers Baseball at the Mercy of the Players Union, Universal DH, and More! | Blue Heaven Podcast