The Los Angeles Dodgers find themselves in the midst of an offseason full of colossal implications. Aside from being firmly in the mix with their top free agents Corey Seager and Max Scherzer, LA will have to either re-sign or replace coveted utility man, Chris Taylor.

Of course, re-signing Taylor along LA’s other top free agents is still a possibility, but if they’re unable to get them to put pen to paper, they could pivot to other big name free agents, like Kris Bryant.

There was a time when it felt like a forgone conclusion that Bryant would sign a record mega deal worth upwards of $250-300 million, but due to a handful of injuries and a dip in production, Bryant is no longer heading for a monster payday of that magnitude. From 2015-2017 the former MVP established himself as one of the game’s ultra elite, where he ranked third among position players in fWAR from 2015-2017 with 20.8, trailing only Mike Trout (25.8) and Josh Donaldson (21.8). Since then, Bryant has posted 17.8 fWAR, ranking him 24th in MLB in that span.

Even though Bryant has seemingly peaked early, he still promises to be sought after for his positional versatility, where he can start at five positions including all three outfield spots as well as third base and first base to go along thunderous power from the right side. We discuss if Bryant could become a potential fit for the Dodgers to add this winter to take over third base and provide some much needed pop as a righty bat. Plus, what kind of contract would the Dodgers have to offer Bryant to get him to seriously consider signing with LA. 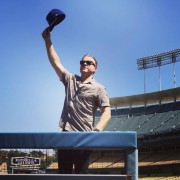