With the offseason in full swing, many are probably wondering what the Dodgers have been doing with their time. Thanks to social media, we can get a look into how they’re spending their time. They seem to be having a good time while they wait for baseball to be back.

Yasiel Puig has been having a great time while exploring in Europe.

I can’t even hide my smile, being here is a real dream come true for me #PuigSoHappy #HalaMadrid ????? pic.twitter.com/l1Cf8Jev2N

His trip has seen him go from Spain, France, and Italy so far. Puig is clearly enjoying exploring Europe with his mom.

Justin Turner and Chase Utley have been enjoying themselves in Dubai, while working with little league kids and learning to play Cricket.

On their final stop in Dubai, @redturn2 and Chase Utley learn to play Cricket and share some baseball tips with the Elite Cricket Warriors. #DodgersinDubai pic.twitter.com/3vDLqe4JG7

.@redturn2 arrives at the Dubai Little League Baseball Clinic and is met with a lot of mini JTs. #DodgersinDubai | #BackstageDodgers pic.twitter.com/f31KM3BWDU

“I don’t know the last time I swung where I didn’t leg kick. This is going to be weird.” –@redturn2

While all of this was going on, Justin Turner gave us all a laugh. He posted this video from a laugh contest he had with Kiké Hernandez on Twitter.

The Dodgers also welcomed a new player to the organization a few days ago. After officially signing with the Dodgers, Tom Koehler had this to say.

Super excited for this opportunity to join the @dodgers. Looking forward to contributing in any and all ways. #LetsGoDodgers #letsgetit https://t.co/6jeTP8YuWW

With the legend @MagicJohnson enjoying #MambaDay. Thank you for all your work trying to bring championships back to LA for the @dodgers and @Lakers. #CaliforniaLove pic.twitter.com/Sha355pvfu

The Dodgers also posted a video of Kobe throwing out the first pitch at a Dodger game in honor of the ceremony.

The Dodgers are clearly having fun during the offseason, but they’re all still working hard to get ready to bring a championship back to Los Angeles! 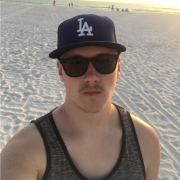