In the spirit of the great movie “High Fidelity” I am continuing to compile top 5 lists, this one about the beginning of the season and signs to look for as indicators about the type of team we have.

The 2017 Dodgers was one of the best teams I’ve ever seen despite their awful September and World Series failure. The bullpen was strong at the back end, the offense had many players be consistent and the defense was stellar. The 2018 team was underachieving (and kind of ugly to watch in some areas) yet still won the Natioal League pennant. We’ll take a look at 5 key signs to look for at the beginning of the season to see if the 2019 team is similar to the 2017 team or the 2018 team.

Jansen Keeping The Ball In The Park

Last year Kenley Jansen had a nightmare season both on and off the field. We know about his heart issues and are very thankful he is health. After a vacation instead of a Spring Training in 2018 he started the season giving up a game-winning home run to Joe Panik and a game-tying home run to Chris Owings in his second game. His velocity seemed down all year and then he had his heart issue in August. Even when he came back he was on medication and never seemed to be himself.

Now he’s come back after his heart procedure and has lost 25 pounds. He’s had a more normal Spring Training in 2019 and his velocity seems  closer to 2017. Kenley game up 13 home runs in 2018 while only giving up 5 in 2017. There are many indicators of how Kenley is doing but if we see a continuation of the 2018 home run trend then that will indicate that Kenley still isn’t back to 2017 form.

Just as I conceived of this article we found out that Rich Hill would be joining Clayton Kershaw on the Injured List to begin the 2019 season. We also know that Walker Buehler got a late start on Spring Training due to some back discomfort, so the Dodgers have been cautious with him. As of this writing he’s only had one Spring Training start and will get one more before the regular season starts. This is not an optimal start to the season, that is for sure.

The danger of the Verducci Effect (where the season after a big jump in innings) could impact Buehler and maybe Ross Stripling. They both pushed their limits last year as Stripling lost all of his effectiveness by the end of the season. Let’s hope that Buehler can overcome the previous innings and can have an impactful 2019. If the Dodgers can keep his innings reasonable I feel he will be ready in October to dominate again. The Dodgers have the depth to withstand injuries but long stays on the disabled list by too many starters is a bad sign. The Dodgers we able to overcome injuries to most of the rotation in 2018 but how might they handle 2019? I’d prefer not to find out.

NOTE: no other team can withstand as much as the Dodgers but there are a lot of fragile arms.

Consistency In The Offense

One of the reasons for trading players like Matt Kemp and Yasiel Puig and signing A.J. Pollock was to find some consistency in the offense.

“I believe we’ve gotten exposed offensively in the World Series,’’ said Roberts, not needing to note that last fall the Dodgers batted .180 with a .550 OPS against the Red Sox. “Now, bringing in guys who hit lefties and righties, less platoons, more consistency.’’ – Dave Roberts in the LA Times

It seems that the Dodgers want players like Cody Bellinger and Max Muncy to play against all pitching. Even adding Alex Verdugo to the bench brings a player who can hit all types of pitchers. Hot and cold Yasmani Grandal was allowed to leave as a free agent without much effort to re-sign him.

I think the team last year was the most talented team I’ve ever been around. But for a host of reasons and some bad luck, some real, we weren’t as consistent. I think a bit thing for us is to avoid the games where we score zero, one, or two runs. As often as we can score three or more and we will win a lot of games doing that. Especially with our pitching staff. – Andrew Friedman

If the Dodgers have a lot of games where they score 0, 1 or 2 runs then have a few with big burst then that is a sign of the 2018 team that was awful in the clutch. With a new set of hitting coaches let’s hope the team can be more consistent at the plate.

A.J. Pollock spoke post-game with @THEREAL_DV about facing his old team for the first time. pic.twitter.com/f7dqL6WbBp

Going into the 2019 season we know that Joc Pederson will be regularly platooned. I also expect Max Muncy to sit a bit to allow David Freese to get some at bats against left handed pitchers. Austin Barnes will catch 3 of every 5 games but, since Russell Martin is also a right-handed hitter, that is not a platoon. Players such as Justin Turner, Corey Seager and A.J. Pollock will see all pitching and it looks like Cody Bellinger and Kiké Hernandez will get a chance to hit against all pitching. Muncy should also play against most pitching except as noted above.

If the Dodgers see a need to go acquire another hitter to fix a deficit against certain handedness of pitching ,then we’ll know that one or more of the players expected to play every day is having platoon splits. Last year the team went out and acquired Brian Dozier and Freese because the team was terrible against left-handers. I’ll be very concerned if there are platoons at more than two spots in the batting order. That would mean too many players are not able to get past bad platoon splits.

According to FanGraphs the Dodgers ranked 4th in overall defense in 2017 and dropped to 23rd in 2018. I covered the possible defensive upgrades in the outfield and it looks like an outfield of Pederson or Chris Taylor in left, A.J. Pollock in center and Cody Bellinger in right should be a stronger defensive outfield than 2018. Not having Matt Kemp in the outfield will improve the outfield defense alone.

For the infield having some consistent players out there will help. There is no way to replace Cody Bellinger’s amazing defense at first base but the hope is that Max Muncy continues to improve at first. He doesn’t need to worry about third or second (for now) so that will help. Justin Turner had some troubles at third last year, including 5 errors in 5 games near the end of the season, but he has had a full Spring Training and is healthy. Second will be fine with Hernandez and Taylor but I think Corey Seager will need a little time to become “Seager Smooth” again.

Even with the question marks noted above if they are in the top 10 according to FanGraphs then that helps the pitching. Good defense saves throwing unnecessary pitches and gives the pitchers confidence that plays will be made behind them.

I’ve listed some signs to look for in the beginning of the season to see what type of team the Dodgers will have. I’ve used the word “hope” a lot but I am very optimistic about the 2019 Dodgers. Every team is different so this team will evolve into their own identity as the season progresses. I’m hopeful that the 2019 team looks a lot more like the 2017 team than the 2018 team. I do believe it is a very good team will be ready to contend for the World Series title in 2019.

What are your top 5 signs to look for in your opinion? Please use the comment section below to express your thoughts. 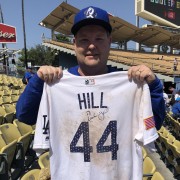