The Los Angeles Dodgers needed some late inning magic against the Cincinnati Reds on Saturday night after the Reds mounted a comeback in the later innings of the game.

Yasiel Puig and Justin Turner both scorched singles through the left side of the infield and were standing on first and second base when Corey Seager came up with two outs in the bottom of the ninth.

We don’t think it will be the last. pic.twitter.com/wypHmG7DVa

Corey Seager said that this was the first walk-off that he has ever had at any level of baseball in his entire life.

He had just enough power on the ball to have it tail away from Reds left fielder Scooter Gennet and Puig was able to score with ease. 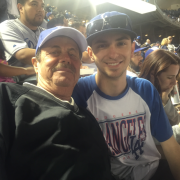