Friday marks the legendary Tommy Lasorda’s 90th Birthday, the last manager to bring a World Series Championship to Los Angeles. As all of you know, the last championship was almost 30 years ago back in 1988! That 1988 season was also the last time the Dodgers have even made an appearance in the World Series.

Well, I think Tommy is getting a little tired of the wait. He doesn’t tweet much, but in early June he wrote a message to the Dodgers that read:

The Dodgers have not been playing like that early-June team, having lost 20 out of their last 26 games. However, it is worth noting that the 1988 Dodgers finished their season with a record of 94 wins and 67 losses. The 2017 Dodgers have already surpassed that and are currently sitting on a record of 97 wins and 56 losses. Of course, this means nothing in October, but definitely a reminder of how good this 2017 Dodgers team has been.

Hopefully Tommy’s birthday and a reminder of his message can provide a spark in them to clinch the division Friday night against the Giants! 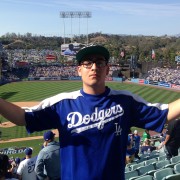 Dodgers' Kenta Maeda Moved To The Bullpen After Last Start