On Saturday, the Cincinnati Reds played the Padres at Petco Park, and a young girl named Abigail showed up to her first-ever MLB game to watch her favorite player who is, in fact, Joey Votto. The sad part came when Votto was ejected from the game during the first inning after getting involved in a heated argument with the umpire about a checked swing call.

The young girl’s mother then went to Twitter and it sparked a lot of attention, which led to Joey Votto coming out of the dugout and giving the young girl a signed ball.

This young fan was disappointed when her favorite player ever, Joey Votto, was ejected in the 1st inning today because she couldn't watch him play. Votto later sent her a signed ball saying he was sorry that he couldn't play. ???

The next day, the Cincinnati Reds brought this young fan and her family back to Petco Park so she could meet her favorite player and the video says it all. She could not contain her excitement.

Joey got to meet his biggest fan, Abigail. ?? pic.twitter.com/S6GySOo6BK

This is not the first time that Joey Votto has made up for something with a signed ball. In 2016, Joey Votto was going to catch a foul ball hit by Stephen Piscotty and a fan went to grab it at the same time, which resulted in Votto not catching the ball. After that, Votto grabbed the fan’s “Reds” shirt to remind him who he was rooting for.

Later that night, he signed a ball apologizing for how he acted and gave it to that fan.

This is awesome. Joey Votto signs a ball with an apology for a fan who he interacted with on a foul ball. #MLBonFS1 pic.twitter.com/h7glbaTRfg

Although Joey Votto gets heated during games, he sure does know how to make it up to his fans and put a smile on their faces.

GUYS. Here's the Joey Votto – Abigail photo that happened at Sunday's @Reds game – and it is just the best. Look at that smile!

Thanks to @SuperBarry11 for giving us all the best story this weekend! @WCPO pic.twitter.com/7kVSq73f6w

Joey Votto is a treasure.

NEXT: Souza Jr Gets the Call, Bauer’s Solution to the Sticky Problem, LA’s Trade, and More! 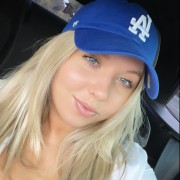