Yasmani Grandal returns to Dodger Stadium this weekend for a 3 game series. The Dodgers have a re-match with the team that brought them to the brink of elimination last year in the NLCS. Here at Dodgers Nation, we didn’t want to drop the ball and not offer something to commemorate his return. That pun had to be made, and it isn’t the last.

Yaz’s Time As A Dodger

In the offseason after the 2014 season, The Dodgers traded Tim Federowicz, Matt Kemp, and $32 million to the Padres. We got Yasmani Grandal, Joe Wieland, and Zach Eflin. The rest is Dodgers history.

For an every day catcher, those are absolutely elite numbers. There’s no way around it. Yasmani Grandal was one of the best every day catchers in baseball. I personally will always remember him for the really stylish bat drop after every home run. That was genuinely cool. Yasmani Grandal was also consistently in the top category for pitch framing for catchers. Regardless of whether you think pitch framing is a good thing, the ability to do it well is an underrated skill for a pitching staff.

Before I get to why Yasmani is so polarizing, it’s important not to let the fact that he was very good pass us by. (Sorry I’m not sorry, Yaz.)

OK that was mean, but funny. I’ll throw Yaz a bone and show you some of his best 2018 stuff.

Why Yasmani Isn’t Remembered So Well

Yasmani Grandal is the very definition of a streaky hitter. When he goes on hot streaks, he’ll rattle off some absurd 2 or 3 week span of hitting 450, cranking 5-7 dingers out of the park. Then he’ll go colder than Candlestick Park for weeks. Even this could be forgivable and understandable. The real reason Yasmani Grandal seems to have left a bad taste in everyone’s mouth is probably centered on his performances in the post-season. Here are his postseason numbers.

Those are absolutely abysmal. There’s no way around saying this, either. Yasmani Grandal has absolutely stunk in the playoffs. On top of Yasmani’s bat disappearing in the playoffs, last year everyone seems to remember Yasmani having at least 5 questionable plays. Yasmani had so many passed balls, it seemed like they were happening every at bat to Milwaukee. He also had a propensity for not being able to handle throws from the outfield to tag a runner at home. Our catcher literally had issues…catching the ball.

Whether it’s fair that he received as much flack for his struggles as he did, the fact is when you’re abysmal at the plate, and a liability behind it, that’s pretty frustrating.

How Do Dodger Fans Remember Yaz?

We asked you, and you answered. Here are some of the best.

Bat drops when he knew he got ahold of one.?

Being allergic to hitting with runners in scoring position

1. Homering in the most unexpected times

2. Dropping balls at home at the worst possible times

That bad drop ? definitely will miss those pic.twitter.com/7Fg5r9RSbE

I was at the game he hit three homers against the Padres..that was pretty cool 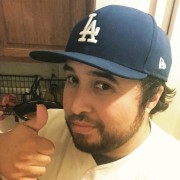