The Dodgers continued their roster construction over the weekend with a series of moves, one of which saw the team designate pitching prospect Dennis Santana for assignment.

The move came as a surprise to many, as Dennis has been one of the team’s go-to pitchers whenever a player has gone down with an injury. In fact, he has appeared in a career-high 16 games for the Dodgers this season. While designating him for assignment doesn’t necessarily mean he’s gone for good, there is a good chance that at least one team will be interested in his services.

Before the team’s game against the Rangers on Saturday, manager Dave Roberts gave some clarity on why the team chose to go in this direction.

Throwing strikes consistently has indeed been a problem for Santana. He looked to have fixed this issue during spring training, where he had a 10/1 strikeout to walk ratio for Los Angeles. During the regular season, however, that split has turned into a ratio of 8 strikeouts to 11 walks.

Should Santana clear waivers and remain with the team, he would most likely remain in AAA OKC to work on his mechanics some more. While the team had high hopes for him heading into the year, it’s become clear that he may need some more time before being ready to contribute consistently at the major league level.

NEXT: Max Muncy Officially Placed on the IL With Oblique Issue 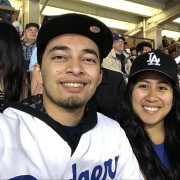 Daniel is an avid sports fan who loves his hometown teams. If he's not watching baseball, you can find him playing or coaching. No matter what, he'll always root for the Boys in Blue!